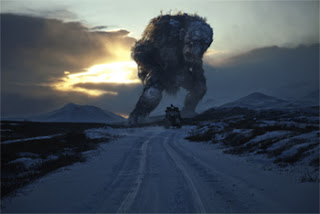 Recently, a few of us went and saw TrollHunter, an amazing movie from Norway. A documentary style film, it follows film students who think they are making a documentary about bear poaches but it turns into so much more. It's hilarious, and the trolls are fantastic! It inspired our next project -  Trolls! This project is for Owen and Lis, as everyone else is busy on personal work at the moment. If anyone else would like to join in, feel free!

Hello everyone! As you can see, there hasn't been a post in a while. Everyone has been super busy this summer on various personal projects, commissions, and exciting travels. Becca is even getting ready to start her MFA! You should check out all our blogs and websites for updates.

I recently finished a painting that you can check out over at my own blog:

We may start up a new challenge again soon, those of us who aren't ridiculously busy. Until next time!
Posted by Elisabeth Alba at 1:31 PM No comments: