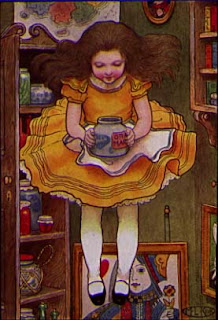 Becca and Lis are kicking off their next illustration assignment a bit early this time. The theme is Alice in Wonderland, and the assignment is to illustrate any scene or aspect of the story that inspires. The story does not have to be taken literally, and the image can represent a moment, a chapter/event, or the entire story (e.g. a book cover). The little twist we will add this time is that the image should convey some sense of dramatic perspective. The due dates will be flexible this time, but we will shoot to have the drawing done this week, and the painting done next week.

(Image by Maria Kirk, 1904)
Posted by Running with Paintbrushes at 6:13 PM No comments:

Hi! So I decided to post my drawing before I go on to ink, make sure there's no major last minute changes. There area few things I'm tweaking, but other than that, I think it's ready. I added a bit of the shading with photoshop just so you'd get a better idea... 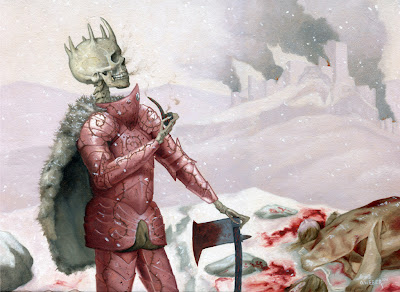 I am extremely sorry it has been so long since my last post.  I have been busy doing anything and everything besides artwork.  I have just bought an apartment with my girlfriend, Sarah.  That and the holidays took up so much of my time that a painting that should have taken me 2 weeks, took me closer to 2 months to finish.  I'm very happy with it now, though, and I'm glad to have finished it.  This was one of those pieces where I was looking at it for so long and it wasn't progressing at all; getting to the point where it wasn't fresh in any sense, and when I started painting it again it was more of a chore than a privilege.  That changed at some point last week, when I started putting the finishing touches on it.  I love skeletons.
My next piece will be a personal piece that I've wanted to do these past couple months.  I have a vacation from work now so hopefully I will be able to get through that quicker than this one.  It isn't fantasy at all really.  But Scott and I are in the midst of coming up with another assignment for this blog that we will post soon enough.  We'll get this ball rolling again soon I promise.
Death King, 14" x 10", Oil on Paper on Masonite, 2011.
Posted by Owen William Weber at 12:14 PM 2 comments:

The Ass, The Fox, and the Lion: 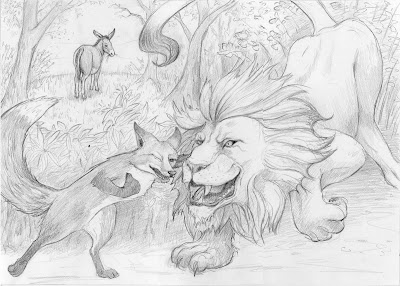 I think I've made some major improvements from my initial sketches. I am really working on making the characters expressive, in facial and body language. This is something that I haven't pushed myself to do very much, so I am really excited about this piece.
Posted by R Solow at 5:56 PM 3 comments:

Here is my idea and a color comp (:

The fable I chose is the Fox and the Goat. There are two slightly different versions of this story, but here's one of them:

By an unlucky chance a Fox fell into a deep well from which he could not get out. A Goat passed by shortly afterwards, and asked the Fox what he was doing down there. "Oh, have you not heard?" said the Fox; "there is going to be a great drought, so I jumped down here in order to be sure to have water by me. Why don't you come down too?" The Goat thought well of this advice, and jumped down into the well. But the Fox immediately jumped on her back, and by putting his foot on her long horns managed to jump up to the edge of the well. "Good-bye, friend," said the Fox, "remember next time,

"Never trust the advice of a man in difficulties."

The fox is stuck in the well and is looking toward the viewer with a mischievous laugh, kind of a "Get a load of this guy!" expression. The goat stands dumbly, unaware he's about to be duped. I think I might ink this piece before painting, too... I miss ink! The color comp is a bit saturated on this computer... the one I made it on has a duller screen... I'd prefer it a little less saturated. Also, perspective of the rim of the well is a bit wonky at the moment, gotta make some reference somehow with a roll of paper or something.
Posted by Elisabeth Alba at 10:56 AM 3 comments:

Blast from the Past

Here's the finish of my Elven Huntress painting I finished up last week. You may remember it from the unfinished post I did back in September. I'm glad to have it off of my table finally. 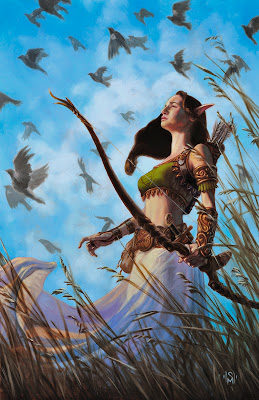 Posted by Scott Murphy at 9:15 PM No comments: 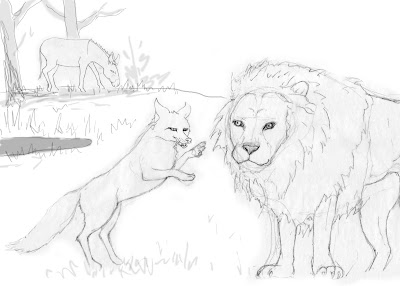 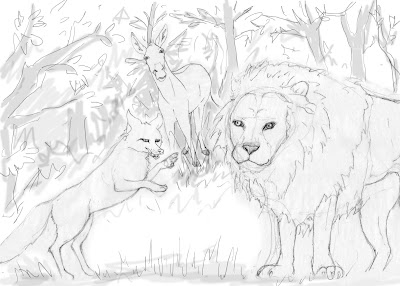 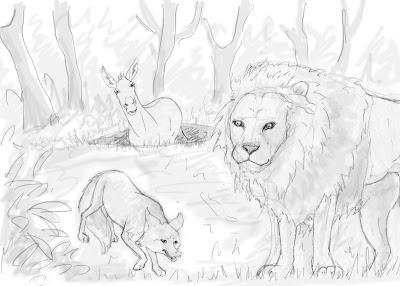 OK, I'm torn. Here is the fable that I chose:
In the first one, the fox and lion are conspiring, while the poor donkey nibbles away obliviously. In the second one, I took it slightly less literally, and show the fox and the lion conspiring, while the donkey nervously looks on (whether or not he realizes he's about to be betrayed is left unknown). In the third image, the donkey has fallen into the trap, and the fox suddenly realizes he is now in danger.

Hello 2011! We here at Running With Paintbrushes are finally ready to get down with some more art. Scott has returned from Egypt; the holidays are over.

The Aesop's Fables project is for Becca and Lis. Take one of the fables (you can read a bunch on http://aesopfables.com/) and illustrate a scene. The main goal of this project is to add an animal illustration to our childrens book portfolios. Everyone likes animals and art directors always ask to see animal images.

And an important moral brought to us by Aesop, particularly relevant to illustrators: Don't count your chickens before they hatch!
Posted by Running with Paintbrushes at 2:42 PM No comments: