For those new visitors, we are working through our newest painting. See the beginning here.
Check back for weekly updates!
Posted by Scott Murphy at 1:22 PM No comments: 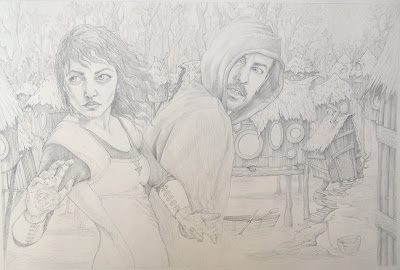 So here it is! Click the image to view it larger. In the scene, Baltrice and Jace are in the the village of Kamigawa, which is located in a jungle swamp. Baltrice is meant to have flames in her hands and eyes - she is holding a ball of fire in her right hand, and in her left the flames are dying out a bit because it is raining. Let me know what you think is working/not working/missing, etc!
Posted by R Solow at 11:47 AM 6 comments:

Here's a quick color comp that I did up in photoshop the other day before starting my drawing. This helped me to think more clearly about colors (though they will most likely change), and the general composition and pose. Sometimes I like to do this if I'm having trouble with an image. 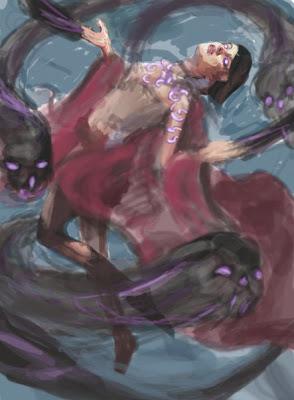 ...And this is my final drawing ready for printing and mounting. I couldn't get my photo to lighten up enough without washing out some parts. So to help, I did a little highlighting in photoshop to show where the lightest areas will be. I think I need to hit the face a little more just to give it that pop, since it's the most important part of the image. Any suggestions or comments are encouraged! 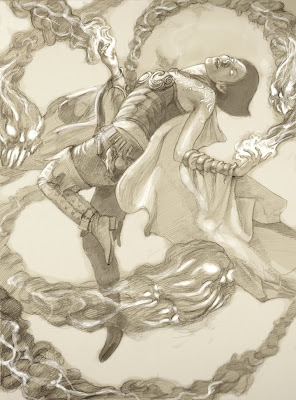 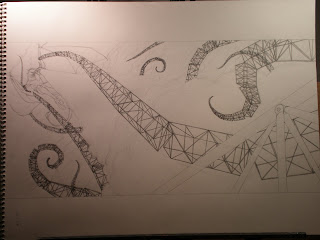 So this is the final drawing for the Agents of Artifice piece. I guess it's pretty straight forward. It will start looking a lot cooler once the painting aspect is started.
Posted by Owen William Weber at 6:45 PM 4 comments: 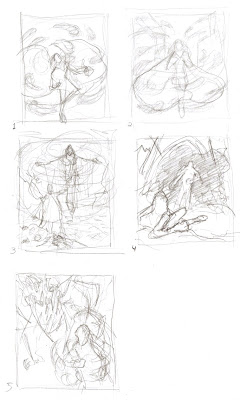 So here we go. I've managed to conjure up 5 thumbnails that I'm fairly happy with. #1 and #2 are images of Lilliana towards the beginning of our story. #1 is supposed to be more of an above view while she is levitated conjuring...something. #2 is  similar to #1, she is levitated with a long tunic and cape bellowing around her. The shapes all around her are of this dark matter that is described as flowing all around her as she summons. She also has glowing purple tattoos that are on her skin when she is casting. #3 is a scene from Grixis, Jace is standing in a floor of zombies and bones and corpses that have come to life and are pulling him down, when Lilliana appears through the cyclonic storm hovering down towards Jace. Her head is described as being thrown back in concentration and her eyes glowing the same deep purple as her runic tattoos. Her arms are said to be outspread while she coaxes the demons back to inanimate state. #4 shows Tezzeret on the ground in the foreground after being thrown through the bronze doors of his tower. There is fire and smoke filling the large arched doorway and the figure of Jace is seen emerging from the smoke. His eyes are glaring blue in his concentration. We can see Tezzeret's metal fist. #5 is an action scene of Lilliana underneath a large bronze mechanical spidery thing that is about to come at her. it is said to have needles for a face and made of various gears and steam.
Posted by Scott Murphy at 3:56 PM 2 comments: 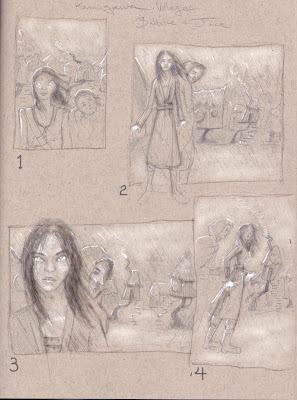 Here they are! Installment #1 for project #1! I chose the scene where Jace (the main character) and Baltrice (a woman who is his co-worker) go to the village of Kamigawa. Baltrice has a power that allows her to control fire, and she's just set some of the village on fire - her eyes glow with flame, and I imagine her hands do as well. There is a great description of this little hut that belongs to the village shaman, who has called the rain to put out Baltrice's fire. So in the scene, it's nighttime and raining, in the center of the jungle village. Baltrice's eyes glow with fire, and Jace has cloaked himself in shadows - he doesn't entirely trust Baltrice and her powers, so he looks at her warily. They are about to confront the village leader, who is in one of the huts behind them...I've put up four thumbnail sketches for this scene, and numbered them (in no particular order). I think the biggest question in my head right now is whether these should be full-figure (#2,#4) or portrait (#3)...I've pretty much ruled out thumb #1, but let me know what you think!
Posted by R Solow at 11:21 AM 2 comments: 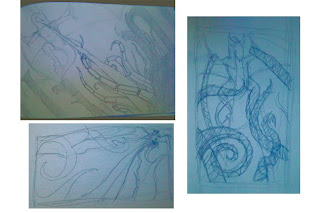 So this is the first of many posts each week showing the process of a painting. This week we are going to show the thumbnails for the Agents of Artifice contest piece. This is a crucial step, it determines the entire direction in which the final is going to come out. It is a huge decision making step. The three best options I have come up with vary in style and perspective. The scene is one in which a summoned dragon is facing off against a group of summoned mechanical tentacles reaching from the ground. The battle take place in a courtyard in the middle of ancient ruins. The first thumbnail shows the fight in a dramatic horizontal angle, the second is tough to make out but it is the fight from more of the tentacles perspective and the dragon breathing flame towards the viewer. The third is a verticle piece in which the tentacles are pulling the dragon down which shows more of how the battle ends, because the dragon does lose.
Posted by Owen William Weber at 7:01 PM 2 comments: