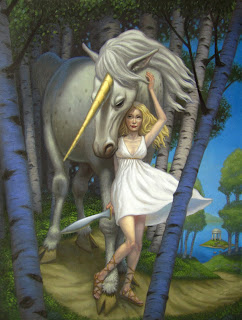 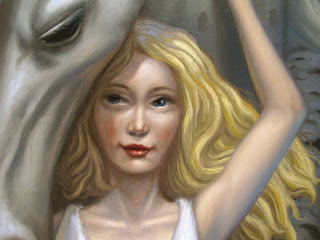 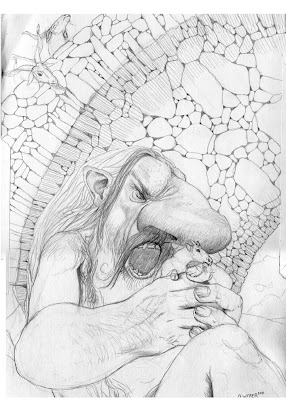 Here is my sketch for the Troll assignment.  It's a take on the tale of the Three Billy Goats Gruff.  The big bad Troll is holding onto the youngest goat as it pleads for it's life, and to eat his father, for he is more of a meal.  The goats father and grandfather look over the bridge wall in the upper left corner.  Let me know what you think!
Posted by Owen William Weber at 4:33 PM 4 comments:

Hi folks! So here is my troll sketch... I included a few rotation variations so it may not be as straight on... depending on what people think. I ended up making the troll less dumpy... I was getting annoyed by his dumpiness and I wanted him to be a little more scary looking. I had a lot of trouble trying to figure it all out, composition, looks etc. I think I'm finally satisfied though. Will be a good portfolio piece for Gencon! I'll probably post a color comp in a few days. I have a vision!
The first one is the original. The other two are tilted toward the right or left. 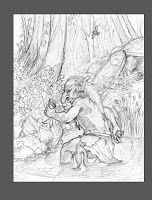 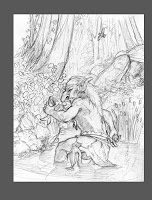 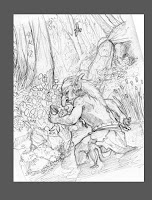 And click this to see an larger one for detail... 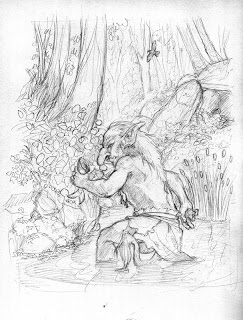 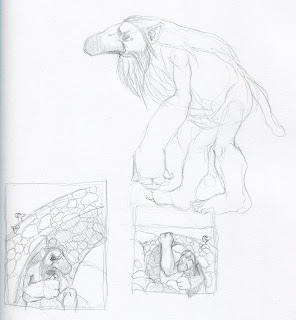 For my Troll piece I tried to come up with many different compositions and things for trolls to be doing, but I kept coming back to the 3 Billy Goats Gruff.  Oh and I hate myself because for the past 2 weeks I have been drawing trolls nonstop, I had pages and pages of trolls and I wanted to show my evolution of drawings to get to these 2 thumbnails.  Then of course I left my sketchbook at work and didn't realize it until I was way to far away to turn back and get it.  Anyway, essentially these are my 2 favorite ideas.  I think I personally like the one on the left.  Let me know what you think.
Posted by Owen William Weber at 9:14 AM 3 comments:

Hey all! Here are my troll thumbs.
The first two - Troll shepherd with goats (if you think a troll being a shepherd is weird, I'm not the only one that thought of it! Google and you will see one of those popular troll statues as a shepherd with goats! haha. He eats them later :P), or a troll fishing with his hovel behind him. I'm going for the fishing scene I think. I want it to be kind of a portrait, a troll in his comfort zone.

This second thumbs are just a comical idea - giant troll with itty bitty sheep... in the left thumb he's bending down and picking one up delicately, and the others are running away. I think it's a cute idea, but I'm still leaning toward the fishing troll... maybe I'll do this later.

I will, of course, work on my troll character design more for the final. He's a bit boring right now.
Posted by Elisabeth Alba at 8:02 PM 2 comments: