I just completed this painting, likely my last one of 2013! I'd been working on it since May off and on in between illustration jobs.  I'm pretty pleased with it as I tried to be more ambitious with size (12.5 x 17.5... big for me) and detail.

The title is "The First Night" and it's from One Thousand and One Nights; the very beginning... as Scheherazade begins telling tales to the Sultan in order to keep her head! Painted with watercolor and acryla gouache. I've got some progress shots if anyone is interested over on my personal blog: http://www.albaillustration.com/blog/?p=594. Also, I now have a Facebook art page where I have posted more progress shots and other fun things. Check it out! https://www.facebook.com/albaillustration
Posted by Elisabeth Alba at 10:45 PM No comments:

I finished this piece for Fantasy Flight Games way back in January of 2012.  The project just kept getting pushed back.  Now it has finally come out in the Lord of the Rings: The Steward's Fear deck.  I really loved doing this piece, I felt like I really loosened up my brush strokes and the palette was exactly as I envisioned it in my head.  This was the first Lord of the Rings piece I've ever done.  I've always thought that I was never worthy or that I wouldn't be able to paint a more interesting image than any of the great artists that have made Lord of the Rings imagery.  But when I got this assignment, it was almost a relief that I wouldn't be depicting some climactic scene from the novels.  I can do Gondorian Shields.  And I'm very happy with how I depicted this item for the game.
Posted by Owen William Weber at 2:55 PM No comments:


For the past month or so, I had been working on a commission for a book cover for a self-published book called "The Silent Deal".  The author, Levi Stack, got in touch with me because he enjoyed my "Save the Date" image from my wedding so much.  I had used Vladislav Erko's playing cards as inspiration for the Save the Date, and Levi was looking for a similar style for his cover.  He wanted the two main characters to be shown on the king of spades card.  Levi had wonderful descriptions for the way the characters looked and how the personalities differed.  He was a great help, and made making the image an extremely painless experience.  I hope "The Silent Deal" is a success and we can work together again on the next book in the series.


Here is an image of the finished painting:

And here is the final cover image.  I personally think this looks awesome, and I'm very happy this came out looking so tasteful.  So please pick this book up when it is released, I will add a link when you can order it. 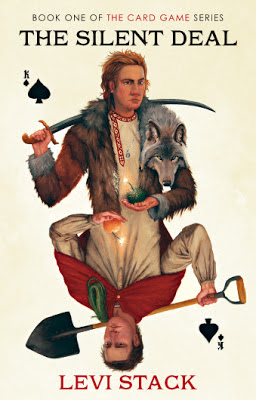 Posted by Owen William Weber at 5:55 PM No comments:

This is a piece I just finished the other day, it's called "Mantra 1".  It's 12 5/8"x 18" in size and oil on masonite.  This was an extremely different type of painting that I was used to doing.  I hadn't painted in a while, and was feeling that itch, so I just took a piece of masonite I had lying around, coated it with matte medium, and just started painting a springbok antler I own.  No drawing, just paint.  I can't think of the last time I did that, possibly never.  It came out looking pretty good, and I then started turning the painting into, what I thought was a cool concept.  A couple days later I looked at it after a particularly hard day at the workplace.  I realized why I was in such a bad mood, the painting I had been staring at for the past few days was awful.  It was really stupid.  I was taking the life out of the antler that I had so lovingly painted.  So I took up a mixture of burnt umber, ultramarine, payne's grey, and alizarin, and painted out everything except the antler.  As I was doing this I started gently brushing over the edges of the antler and it started getting nicely smokey, as I did it more, it truly transformed the painting into something of which I am extremely proud.  I can't wait to get started on pursuing this subject matter further.  It reminds me of what my thoughts look like when I concentrate very hard and focus on a subject, hence the title.  I hope you all like it, cause I'm very excited by it, and will be delving into this subject matter further. 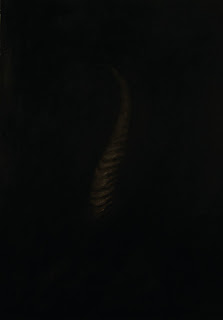 Posted by Owen William Weber at 4:28 PM No comments:

This piece has a bit of an interesting history.  I was given a commission to do a dwarf piece, where a dwarf king was kind of contemplating his past and thinking of where he went wrong.  So I did a really nice drawing of this; it was right up my alley(and I will eventually paint it also).  The art director loved it, but his bosses weren't quite on board.  So the art director asked for a dwarf in action.  So, while I was away for a wedding, I spent any second at the hotel sketching this image.  When I got back home, I sent the image to the art director, but because this back and forth had gone so slowly, mostly between the time of the first drawing and the decline from his bosses, this piece was in no way going to meet the deadline.  The piece was cancelled, and I was not compensated, because I had not started painting it yet, as stipulated in the contract.  Whatever, I was angry initially, not because I wouldn't get the money, but because I was happy with both images and they would not be published.  But that's how it goes sometimes, I think most illustrators have these types of stories.

Anyway, I put this all behind me, and went ahead and painted the piece anyway.  Dwarves are awesome! And I'm not gonna just not paint one because I didn't get paid.  This is Fægår, (pronounced fay-go) a dwarf warrior that will inevitably walk away from this image, and in the future I will paint him in that throne, looking quite weary and old.  I wanted this piece to kind of have that feeling of old sepia toned photos, so when I paint the image of him as an older man, it will seem like he is looking back into his past.  Hope you all like it, I will try to finish the other one before Gen-Con.

Posted by Owen William Weber at 2:36 PM No comments:


Finally, wrapping this series up is, personally, my favorite direwolf, Ghost.  Ghost is the runt, sort of.  He's the odd man out.  He's albino, and a perfect companion to Jon Snow.  He makes Jon more terrifying to his opponents, and he makes Jon look like a leader to his brothers in Black.  Ghost is one of the only animals in "A Song of Ice and Fire," that moves the story along.  He finds dead bodies in the snow, he brings Jon to save Commander Mormont, and much more.
Here I have tried to show Ghost at his most ghostly.  In a snowstorm north of the wall, his body blending in with the landscape, and all you can see is his deep red eyes.
So here concludes this series, hope you have all enjoyed it.  I will put these images on my website soon and then put prints and originals on etsy. 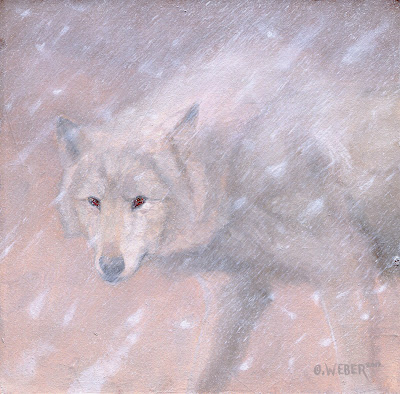 Posted by Owen William Weber at 11:42 AM No comments:

Today's wolf is arguably the most ruthless of all the Direwolves. Robb has trained Greywind to be a warrior and all of Westeros knows this. Greywind is known as being Robb's right hand and a force that has to be dealt with in order to defeat Robb.
Here I have shown him in the middle of the battlefield, looking his angriest. 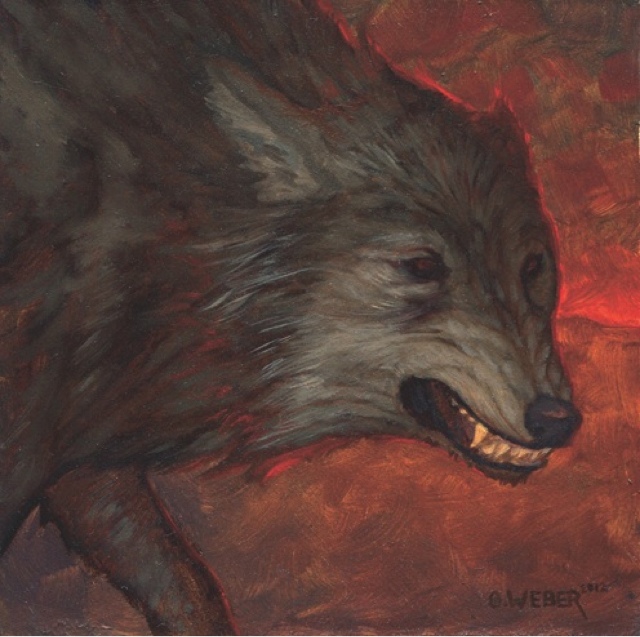 Today's wolf is Summer. Here I show him when he was still in Winterfell under a weirwood tree. Summer is a wolf that I really loved from the beginning when he killed Bran's assassin. I love how protective he has been and how connected he and Bran have been from the start. Now they have almost become the same character. 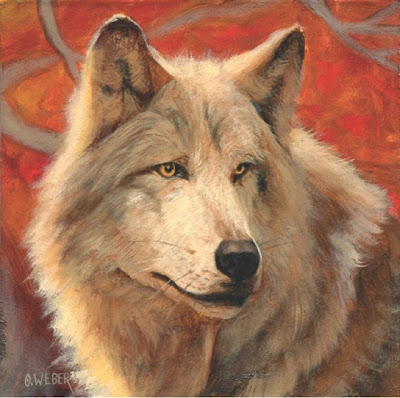 Today's wolf is Lady.  She was the first one to die and so we never quite knew what role she would have played in Sansa's life and how things would have been had she stayed in the story.  Would Sansa have been a fiercer character? Would Lady have played a part in killing any main characters? Or would she have been the lamest of the Direwolves and been kept in a life of ribbons in her hair and had a vegetarian diet?  We'll never know.  I like to think she would have made Sansa stronger and made Joffrey fear torturing Sansa so much.
Here we see Lady just a few moments before her impending doom. 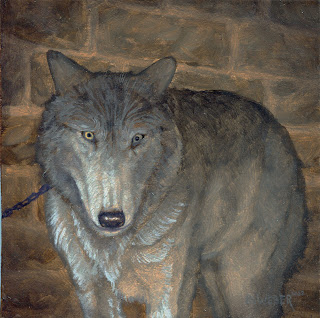 And a Happy New Year Everyone!  Last year was the Best Year of my life, so I'm hope this year will be only slightly less good.

Posted by Owen William Weber at 12:32 PM No comments:

This is my second of six posts showing my series of the Direwolves from the "A Song of Ice and Fire" books.
This is Shaggydog, Rickon's wolf. He is quite a fierce protective pet, but I wanted to show him in a calmer state, wandering the snowy terrain. 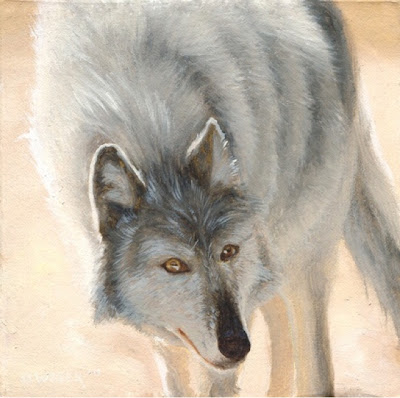 Posted by Owen William Weber at 9:04 AM No comments: