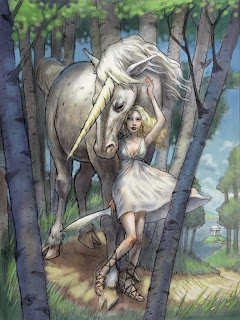 I have my copy mounted on board. I wanted to see my color idea before I dove in to paint. The first idea is very straightforward white sunlight and blue skies with shadows falling into grey-purples. The atmospheric perspective will just be a fade into pale blue. Pinks on the girl and gold-yellow on the horn and hair will bring attention there. Right now the sea needs a little more brightness and glitter. Maybe too tame? Try storm filled sky or deep golden light?

P.S. I'm on the header! Thanks, header maker person.
Posted by Craig Maher at 1:21 PM 2 comments: 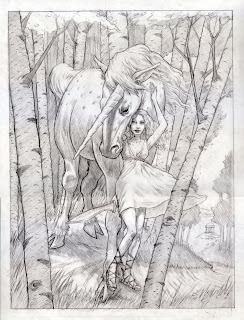 Here's my drawing. Sky and sea and a small island peeking through at the right. This will need a color sketch to figure out color and values. Should be a challenge with a white dress, white birch trees and a white unicorn.
Posted by Craig Maher at 11:25 PM 5 comments: 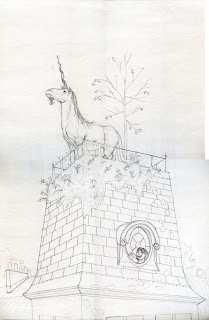 Sorry I'm so late with this, I finished it saturday but for some reason I thought monday was the due date, and then I realized monday night I had to go to a passover seder.  Anyway, this is my sketch.  I really like it, I tried to incorporate as much of the unicorn tapestry as I could: the pomegranate tree (I'll paint the leaves in later), all the different flowers, and I tried to make him less a horse and more a hybrid goat-horse.  I do need to know what you all think of the girl.  I made her looking at the unicorn as a compositional thing, eyes going toward the center of interest.  But technically she can't be looking at the unicorn.  You could make the argument that she is reacting to the hoof noises on the roof, or plants growing in from her ceiling.  Should I change her face to be looking at the hoof prints on the side of the building (which will be growing flowers and grass as well), or keep her as she is?
Posted by Owen William Weber at 9:19 PM 5 comments:


First of all thanks to Becca for inviting me to be in on this Unicorn "assignment" and thanks to everyone for letting me be part of Running with Paintbrushes! Let me dive right in ...

I like the upshot of the Unicorn. For some reason I think a unicorn should be with a young woman, maybe a "barbarian" girl? 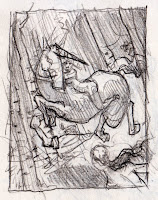 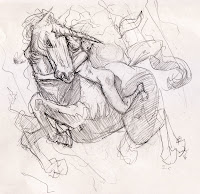 A much more active shot. The woman has just jumped on.

But I think I like this more. A little "posey" but I like the interaction of the unicorn, woman and landscape foreground and background. I'm going to start drawing this up but there's always room for input.
Posted by Craig Maher at 2:59 PM 4 comments: 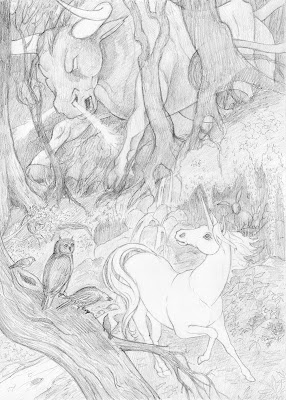 Well here it is! I am pretty pleased with how it's looking so far, and excited to play with the color - the top part with the bull will be done in reds, the bottom part in blues/greens... I think I'll try to do some sort of color comp like Lis.

My new goal is to do better thumbnails. I definitely didn't spend enough time flushing out my idea initially - I was impatient to get to the 'real' drawing I guess. I'm curious what ya'll think about my horse anatomy (esp you Lis, as our horse expert). I want the unicorn to look dainty, and not totally realistic (tiny hooves) but still plausible.
Posted by R Solow at 7:01 PM 6 comments: 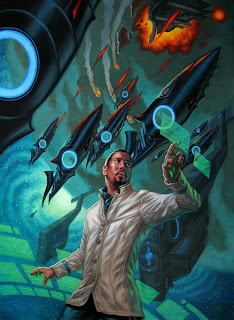 We are excited to announce that RWP has a new member, Craig Maher. Hailing from Poughkeepsie, NY, Craig has worked for clients such as Alderac Entertainment, Third World Games, Hidden City Games, and more. See his great work at his website, http://craigmaher.net/.
Posted by Running with Paintbrushes at 9:54 AM 4 comments:

So here is my final (kind of) sketch and a color comp. I want to make the trees more gnarly and interesting.. right now they're a little too straight, the foreground trees at least.

I realllllyyy love this color comp and I have a sinking feeling I won't be able to replicate it with watercolor... but we'll see. I still struggle with watercolor sometimes and feel like I try to do things that watercolor aren't meant to do, but damnit, I can make it happen!!!! Just need patience!

A bit late to the game here. Too many things going on lately and not enough time in the day. Anyway, here's the two i came up with quickly.

1. Is of a dreadful unicorn thing with a twisted gnarled root looking horn, being ridden by some dark character. The poor fellow in the front is cowering on a pile of bones...kind of a judgement scene. I want to contrast the darkness of the unicorn/rider to the paleness of the naked guy and the bones. 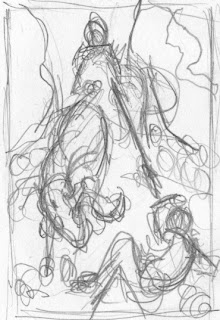 2. Is of the same scene but looking past the dark figure/unicorn to the poor soul. 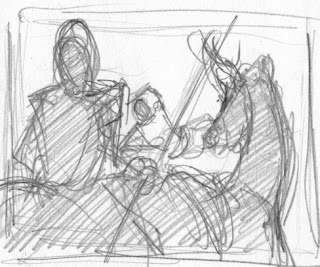 and the unicorn demon horse will look somewhat like this: 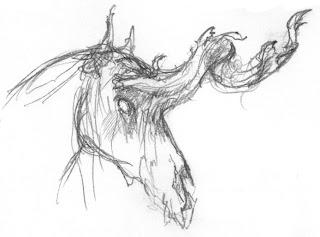 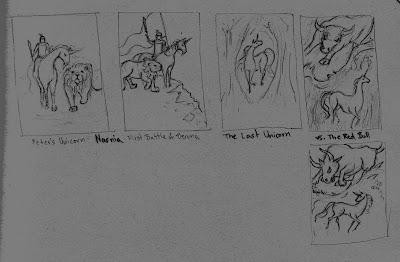 So here are my thumbnails for the Unicorn project. The first two ideas are based on the unicorn that is mentioned in the Chronicles of Narnia, which Peter rode into battle (I've included Aslan the Lion in the images as well). I think a piece like this would enhance my portfolio, because I don't really have any teenage boys in there yet, or anyone in armor, and it could be a good book cover sample. BUT I really like my other idea, which is from the story The Last Unicorn by Peter S. Beagle - in the story, a unicorn ventures out of her protected enchanted forest to find the rest of her kind - the Red Bull has chased all of the other unicorns to a far off land. I thought it would be cool to juxtapose the red of the Red Bull with the gentle blues and greens of the Unicorn - it's less of a concrete scene, and more of an image that might describe the story as a whole.
Posted by R Solow at 9:29 PM 4 comments:

So I only have two thumbs, because I became pretty set on the 2nd one! :P 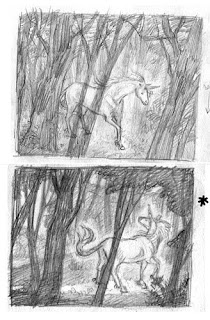 It's going to be a scene around dusk, and like Owen's, at the unicorn's feet and the trail behind it, there will be glowing plants growing (it's a unicorn thing, you know) and the unicorn will also be glowing!
Posted by Elisabeth Alba at 8:44 PM 5 comments: 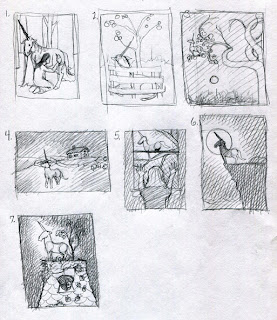 My favorite one is by far the 7th one.  The window would have a girl looking out of it, trees and grass would be growing everywhere the unicorn has touched, and it would be glowing in the night.  I did a sketch today, that isn't included here, where it's a bit more of a perspective and you are looking a bit more under the unicorn, which I like a lot, very dynamic.
I like the 3rd one, but I think it's ripping Palencar off a bit too much.  All the others I think are a touch too boring.  But I would love to know what you think.
Posted by Owen William Weber at 8:36 PM 4 comments: 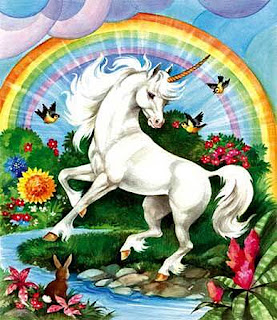 Oh yes! Oh YES! They are magical and majestic and... and... and sparkly and pretty and rainbows and kittens and fuzzy things!! 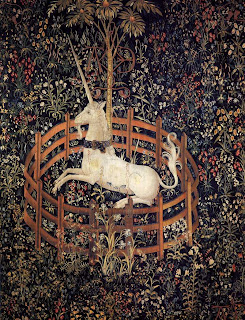 But seriously, our next project theme is unicorns. This is going to be an open-ended assignment - as long as there is a unicorn (or unicornS) involved, it'll pass.
Why unicorns? Well, because they are awesome.
I mean, look: 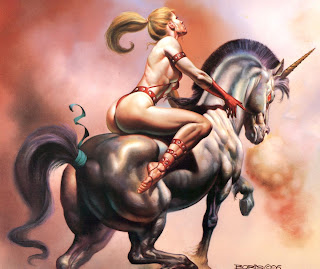 Even Boris Vallejo likes unicorns!
Thumbnails due: 4/10
Sketches due: 4/17
Final due: 5/4
Posted by Running with Paintbrushes at 11:58 AM No comments: