Hi! Finished the painting. I think I'll call it "The Call of Hathor"... maybe. Titles are always difficult! I originally had white around the image and border, but it was too bright so I brought in the dark blue color on photoshop. Night paintings, especially with watercolor, can be challenging, but I think I pulled it off... The glow was achieved by missing chinese white with greens/blues/yellows, made me want to play with an opaque medium like gouache again! maybe next time...

Maybe I should send this over to Neil deGrasse Tyson who wrote Death by Black Hole. He mentioned, with annoyance, how artists always paint either a full or crescent moon. Since reading the book, I've always wanted to make him proud with a gibbous moon! Hmm... apparently he is now too famous to personally e-mail. Ah well, this is for you, Dr. Tyson!
Posted by Elisabeth Alba at 6:03 PM 2 comments: 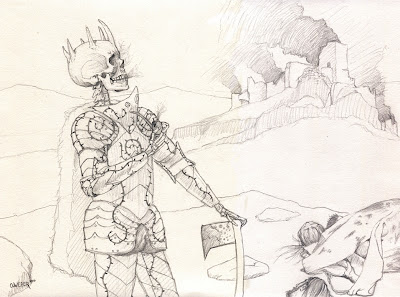 After a long day of work even Death needs to relax.  Let me know what you think.
Posted by Owen William Weber at 7:06 PM 1 comment:

This is my final for my "Winter: Last Flock" piece.  I have finally finished my "Winter" series, for which I have been working on for the past year.  I am truly proud of this series and personally feel it is some of my best work thus far.  I doubt I could do something like this for any other season, I have grand feelings for autumn, but I don't think I could show 4 vastly different feelings or images to make a series.  Winter is a very unique season.  I can't quite put into words why it has inspired me to do this series, but I hope it comes across in the paintings.
Winter: Last Flock, Oil on Paper on Masonite, 27" x 9", 2010.
Posted by Owen William Weber at 2:38 PM 1 comment: 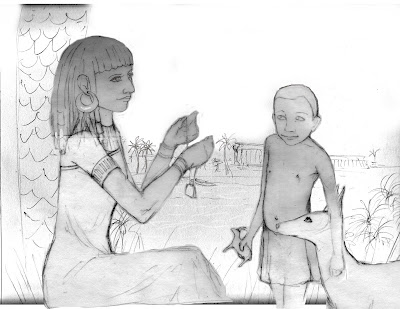 Hi there! Well, it's been a while! I've been back from Egypt for a couple of weeks now, and am going through the somewhat painful process of getting back into the groove of working. This is my sketch for the Egypt-inspired piece. It's a scene of a mother and child on the banks of the Nile in Luxor. The mother is putting an amulet around the child's neck to protect him. Children were considered very precious, and often had amulets tied to their wrists and ankles as well. This child is holding a toy and is accompanied by his dog (oddly enough, modern day Egyptians tend not to have dogs as pets, but it was common in ancient times). The sketch is pretty rough right now - I pieced it together in Photoshop, and I still have a good deal of designing and refining to do, but let me know what you think so far!
Posted by R Solow at 2:46 PM 3 comments:

So Scott is off in Egypt, as we have said many times, and he has been doing some commissioned projects for some card companies.  So my next piece will be another personal piece for my portfolio, a  "Death King" image.  A Skeletal character with armor, more a character based image than story based.  My idea is based around this character having a nice relaxing smoke after a day of hard work. 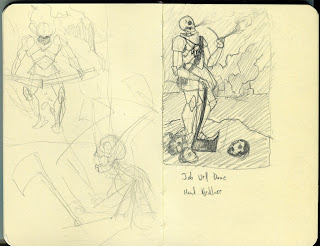 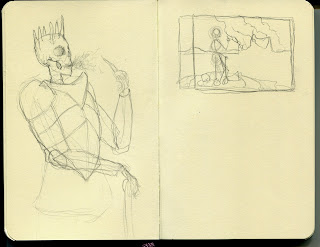 So these are my thumbs.  I will be doing the horizontal version to make more of a card based composition.  See you in a week or so.
Posted by Owen William Weber at 7:43 PM 2 comments:

Hello! So here is my final drawing, much better than the first sketch... 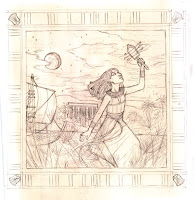 So here is my idea! I already see things I want to fix... lower the frame so there is less sky, anatomical issues, make the papyrus clearer (that will really happen in paint though). I wanted to do an action scene, something that could be suitable on a book cover.

Story in brief: Some young Egyptian wealthy/princess/priestess-esque girl has been possessed/sleepwalking, hearing a goddess and heading toward some unknown destination. She's holding a sistrum, an ancient instrument typically associated with women and either the goddesses Hathor or Bastet. It's a night scene, with a boat on the nile (that she disembarked from, or perhaps someone is trying to catch up with her?), and a temple on the shore across the river. I plan on making her eyes and the sistrum glowing.

Oh... I just realized if the moon is just a sliver, as I have it here, there probably wouldnt be much moonlight. Hmmm... perhaps I should make it a full moon or even a gibbous moon, the kind artists rarely paint.

Border with egyptian motif or no? Don't have any pieces with borders, so it could be nice...
Posted by Elisabeth Alba at 10:04 PM 3 comments: