Here is my final piece! Watercolor/acryla gouache/digital - I want to make the corrections in the painting that I made digitally. I just did them digitally first because it's easier to see what I'm right and wrong. Submitting it to Spectrum tomorrow along with two others!

I found some more great information about Rán here - http://reclaimingthedarkgoddess.blogspot.com/2010/03/ran-norse-goddess-of-sea.html

From the link:
"She has been called cruel, greedy and insatiable. She reigns over the the Underworld found at the bottom of the sea. Ran mated with Her brother, Aegir, the sea god, and they had nine beautiful daughters, the Waves... Her name means "robbery", and She could often be found lurking on the dangerous cliffs and, with the help of Her daughters, enticing mariners to approach; once within Her reach, She spread Her fishing net over them and calmly draws them down into Her realm.

"The Norse people believed that drowning victims were not admitted into Valhalla; instead, they went to Ran's realm of the dark. She was, therefore, also considered to be a Goddess of the Dead. If the dead had gold, they were treated well within Her deep sea abode, and the mead would flow freely... Ran represents water; and, as such, She controls the life force of all the creatures on Earth."
Posted by Elisabeth Alba at 12:28 AM 1 comment: 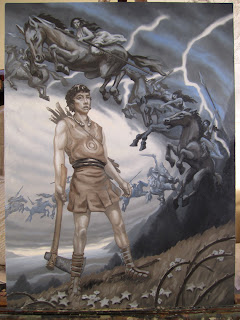 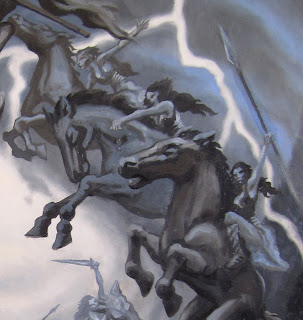 Inspired by Petar Meseldzija I decided to do an underpainting for this piece.

He, of course, has a lot of experience and I'm sure his handling of the thinness of the paint sets up a better underlayer than I've created here. Also I know a warm underpainting can set up some great contrasts and warm shadows but I simply used a grey palette made of Burnt Umber, Ultramarine Blue, and Titanium White. This was an experiment in planning tone for me. I spent too much time blending the background instead of just laying it in but I'm happy with the way I simply blocked in the forms on the rest.

P.S. I had a family friend pose for the face and made my viking even younger. This will also contribute to a better expression on his face. I added a bundle of sticks on his back for a little storytelling ... "I was out collecting firewood when suddenly ..."

Lots of painting still to go! 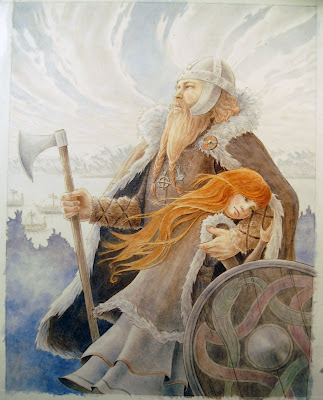 Hey All! Soooo I'm a bit late on this thanks to some commissions, but I'm posting the progress to see what you guys think of where it's going. I need to darken up that shield and play a bunch more with the background... basically everything can use some more work, but I'd love your thoughts before I finish it up! Thanks! (Also FYI the colors look a lot duller here than on my computer! Ug. Technology. Anyone have suggestions for that too?)
Posted by R Solow at 8:33 PM 5 comments:

So my viking painting is finished but I'm expecting a critique tomorrow and might have a few changes. I don't want to post it until those changes are done! Here's a teaser (: 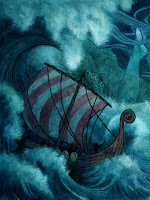